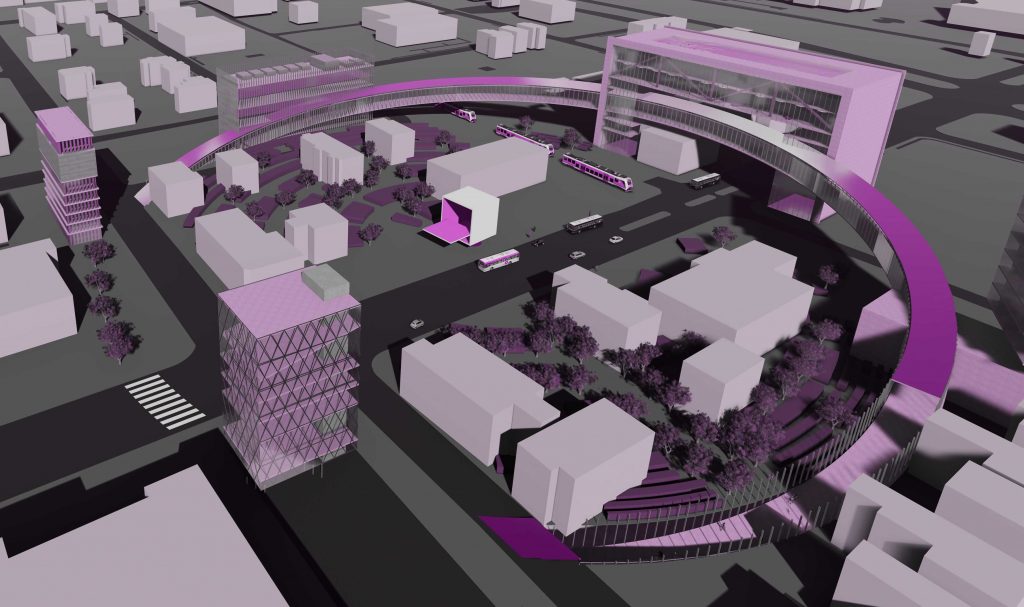 As architects, our role is not to dictate to the public how they should occupy space. Any attempt in this direction no matter how beautiful it’s “sold” or described within a “story” is destined to fail. Our job is to inspire different uses with the spatial sequence of spaces, through decisions taken on privacy, lighting quality, accessibility.

Martin Luther King, Jr. Avenue does not have many great spaces existing. However when the architect, landscape designer, and interior designer is up for the “surgery” to improve the urban tissue and is up to propose new spaces they often look for the tabula rasa moment (the vacant site) within the city grid.

It is also possible to propose alternative systems than purely relying on the existing city grid to open up a new project area. We designed a pedestrianized loop that connects various sites of intervention taking the MLK Jr. Avenue as its central axis. This loop would neither be elevated nor sunken nor be on the ground level only. It would dip underground on the west side of the intervention and get elevated on the eastern end in order to allow the DART train to pass under.

Our urban strategy respects the presence and potential of Martin Luther King Jr. Avenue, therefore, celebrates the axis with a gate building.

Instead of distributing the project program with very specific locations in our project area, we have taken a different approach respecting the unexpected nature of their occupation.

We have provided Extra Large, Large, Middle, and Small size floor-plates, footprints, ceiling heights following the programmatic breakdown offered by the brief. For us a senior living unit is regardless of its occupant profile, could very well be converted to student housing in the future. Therefore it is designed as a 50 unit stacked building facing the beautiful skyline of the Dallas Downtown.

Moving towards the east on our loop, we have proposed to use the intersection of our loop with the ground for a beautiful park that can also be used by the residents. The existing presence of the trees in this area also influenced this program and our decision on locating the greenest landscape we have here. The sunken loop connects two more retail-focused -stacked spaces that have a regular floor to floor height except for the auditorium (potential classroom) and completely blind space (potentially dance studio) provided on top levels of each tower.

These anchors would define spaces on the loop that can be recognized during the pedestrian experience as destinations in the skyline however would look utterly separate in the existing city grid.

The production studios, workshops, and learning center is located right next to the DART rail station and on the intersection of the loop with the ground on the north end of the site due to practical reasons.

The gate building has the highest floor to floor dimension to allow broader activities to take place. On its roof, an outdoor public pool is introduced.

A series of indeterminate frames for different occupations allow a flexible infrastructure without imposing anything on our communities and also is more welcoming for innovation.